Tank Rooms. The lower story of the Meher Retreat building on the Hill was originally a water tank for the British Army camp. Meher Baba stayed here occasionally during the 1920s and secluded Himself in the west tank room during 1926 writing part of The Book. At that time there were no doors, so Baba, who was very agile, would climb up rungs on the side of the building and climb down a ladder into one of the two large tank rooms. Mehera and the other women would look up from the Post Office compound as Baba would wave from the top before going down into the east tank room.

In mid-June of 1927, Baba had doorways made to the Tank Rooms for easier access. The growing Meher Ashram was then shifted from the family quarters in Arangaon, to Upper Meherabad. Like the Hazrat Babajan School, the Meher Ashram was also a free boarding school for boys, but with greater emphasis on spiritual training. The Meher Ashram boys slept in the two tank rooms. The west room was also used as an assembly hall during the day. During that time, the south room was used as the office and quarters of the Meher Ashram superintendent, Buasaheb.

Crypt Room. In May 1927, Baba chose a site west of the tank rooms and had a small hut of bamboo matting and steel sheets built there. On June 30th, when the new Meher Ashram for boys was transferred to the Hill, Baba spent that night in this new hut. Soon after, He ordered a pit to be dug on this spot – 6 feet long, 4 feet wide, and 6 feet deep. This pit was lined with stone masonry, and small steps were built leading down into the crypt. A platform was built extending from the east wall of the crypt so that Baba could greet visitors and gather with the schoolboys there. Another hut of wood and steel sheets was erected over the crypt with a door to the south and a window to the east. In August 1927, Baba began spending His nights here, and on November 10th, He began a 5-½ month period of seclusion and fasting. During this time, a row of structures made of bamboo matting was constructed, extending to the north from the Crypt Room. This became the Sadak (seekers) Ashram, and four men disciples fasted in seclusion inside these rooms for 2 ½ months beginning in December 1927. At the same time, Baba began to reveal spiritual explanations to the boys, and many of them experienced great inner transformation through His personal contact. This was the beginning of the Prem Ashram.

After the ashram returned from Toka in 1929, the wooden walls of the crypt room were replaced with soft stone construction, and windows were added to the north and west sides. Some beautiful photographs were taken of Baba and the Ashram boys on this site during that period.

Panchvati Cave. Beginning in June 1930, Baba had some of the mandali participate in a milk fast in silent seclusion with Him. He positioned a few of the men in some of the important buildings of Meherabad of that time, including the crypt room. But Baba himself stayed in seclusion with most of the men who were allocated spaces in all three of the tank rooms.

Continuing the work of fasting and seclusion, later that year Baba asked His mandali to dig a cave on the east side of Meherabad Hill. He named it Panchvati Cave and went into seclusion there on November 15th, 1930. However, during that time Baba allowed the western journalist, Paul Brunton, to interview Him here. But when Baba gave predictions of future cataclysms and encouraged Brunton to spread His name in the west, claiming He was the true Messiah of the age, Brunton was taken aback. He was skeptical about Meher Baba in his book, “In Search of Secret India.” This served the purpose of discouraging many casual curiosity seekers from contacting Baba throughout the rest of His life, though some sincere seekers first heard the name of Meher Baba through Brunton’s writing. In 1933, the British government ordered the Post Office to be demolished. But at the same time, some new construction was commencing up on the Hill to accommodate the new women’s ashram that Baba was planning to shift back to Meherabad from Nasik. So the Post Office was partially demolished and the materials were used for the construction on the Hill.

Kitchen. The Kitchen for the women’s ashram was built then, using some of the stones from the Post Office for its foundation, on the approximate site of the Meher Ashram dining hall. The largest room was used for some years as the main kitchen for the ashram. Before His cabin on the Hill was constructed in 1935, Baba would rest in the small room west of the kitchen. From 1935, that room became the bathing room for the women mandali.

In November 1933, the east tank room became home to Baba’s close eastern women mandali. Mehera, Mani, Khorshed, Naja, Soonamasi and Valu were strictly sequestered, and lived a life of obedience, purity, and poverty. They would pass through a corridor of bamboo matting from the East Room to the kitchen each day to do their work. There was also a corridor leading from the West Room to the main kitchen door. These barricades of bamboo matting created a compound in which the women were free to move and exercise. In addition to her standing order from Baba never to be touched by a man, during this time Mehera was not allowed to hear the sound of a man’s voice or even hear a man’s name. So if a workman had to be on the Hill, Mani would sometimes play the sitar for hours in order to drown out his voice. 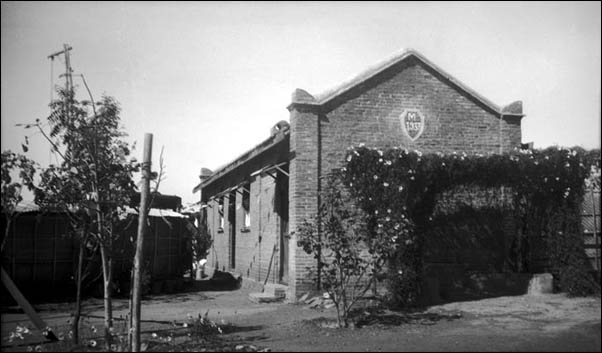