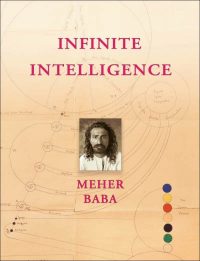 This book delves into an ageless subject: God as Infinite Intelligence. Unlike ordinary intelligence, God’s Intelligence not only knows everything but is everything. The universe, which is nothing but imagination, has been created by Intelligence as Īshwar— Creator, Preserver, and Destroyer. But when Intelligence as the embodied soul identifies with the forms of Its own imagining, this false thinking binds It, and at the same time, actualizes the universe by bringing it into experience.

From this starting point— the interplay of thinking and imagination— Infinite Intelligence unfolds a vast cosmology in which all things, conditions, and human types are shown to derive from the various states of God. The book explains the role of sanskaras (impressions) in the evolution of thinking, and it describes how sanskaras are subsequently eliminated through the yogas of knowledge, action, concentration, and devotion. Towering over the spiritual panorama is the figure of the Sadguru or Perfect Master. Encompassing all the states of the Infinite Intelligence, the Sadguru offers man release from bondage and holds the key to the Realization of Self.

Infinite Intelligence is a landmark publication in the history of Meher Baba’s writings, not only for its substance but for the many puzzles and enigmas that it poses as a literary work. Its text is edited from a manuscript in the Archives Collection of the Avatar Meher Baba Trust (in Ahmednagar, India), a manuscript consisting of two unsigned handwritten notebooks that probably date from the mid-1920s. Whose is the handwriting? How did it get transcribed? What is the evidence for Meher Baba’s authorship? Does it contain one treatise or two? What is its relationship with In God’s Hand (the recently-published handwritten manuscript by Meher Baba)? How does its idea content integrate with that of Meher Baba’s later works, especially the Discourses and God Speaks?

These questions and others are explored in the book’s supplementary materials, which include a foreword and introduction, lengthy essay, and a series of appendixes. The text also includes marginal summaries, synopses, an extensive glossary, detailed notes, full index, and other aids. Designed to serve the general reader as well as the scholar, this edition brings before the public for the first time an important body of original philosophic material from the early years of the life and working of One widely recognized to be the Avatar or Christ of the age.