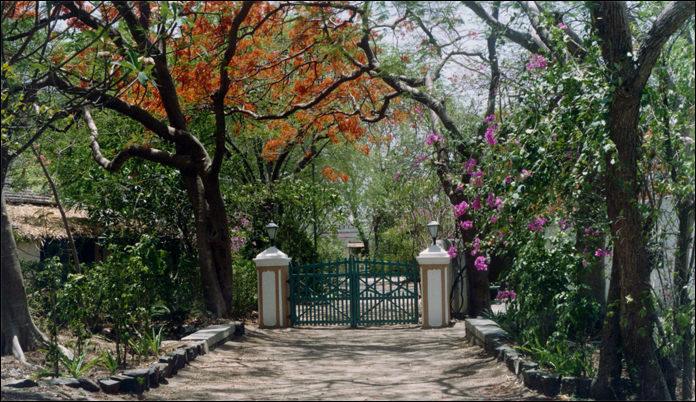 Historic Meherazad divides into three sections: the women’s side, the men’s side, and the outlying properties. The women’s side includes Baba’s house, various adjacent structures, and Mehera’s garden. The men’s side includes a line of rooms with Mandali Hall at their centre; adjoining or nearby structures and sites; and a garden extending to the north. The most important outlying properties are Seclusion Hill and the approach road. This tour describes a few of the more significant sites at Meherazad. In recent years Meherazad has acquired new lands and constructed new buildings and facilities, such as the Meher Free Dispensary and the associated staff quarters. These newer developments are not included in this tour, which concentrates on historic Meherazad as it stood when Baba was in His physical form.

Baba’s House: Completed in 1948, the Main Bungalow at Meherazad served as Meher Baba’s primary place of residence for the last two decades of His physical lifetime. Some of the important rooms in the Main Bungalow are listed as individual items below.

Baba’s Room: Originally Baba occupied a room upstairs in the Main Bungalow. But in the aftermath of His Satara automobile accident, in 1957 He shifted to the ground floor. It was in this room that Meher Baba dropped His physical form on 31st January 1969.

Drawing Room: The first room that one encounters on entering Baba’s House through the main entrance on Mehera’s porch. Here Baba and the women mandali would sit together.

Dining Room: Located next to the drawing room on the back side of the house. Here Baba and the women mandali used to eat their meals together when Baba was not eating in His room.

Mehera and Mani’s Room: This corner room on the ground floor faces the eastern and southern wings of the garden. The umar tree (see below) stands directly outside the east window.

Umar Tree: Standing directly outside Mehera’s eastern window, in the months after Baba dropped His body in 1969, the bark of this tree molded itself into an image of Baba’s face, comforting Mehera in her grief.

Mehera’s Garden: One of the reasons that Meher Baba shifted residence from Meherabad to Meherazad was to provide Mehera with a home with more water so that she could create a garden. Extending between the main bungalow and the back door of Mandali Hall, Mehera’s garden, with its bowered walks and potted plants, is an expression of Mehera’s love for her Beloved.

New Life Caravan: The women mandali used the caravan as their sleeping quarters during the New Life travels of 1949-50.

The Go-Down: One of the original structures at Meherazad that served as a storeroom (“go-down”).

Mandali Hall: Originally a garage and later a stable, Mandali Hall became Baba’s “office” and a primary place of His work at Meherazad. Here he met with the men mandali on a daily basis.

Pendu’s Room: One of the original rooms on the Meherazad property, Baba stayed here during one of His early residences in 1944-45. Later it was occupied by Baba’s cousin and longtime mandali Pendu.

Aloba’s Room: One of the original Meherazad structures, for a short time Baba gave interviews here. Baba’s disciple Aloba lived in this room for almost four decades until his death in 2002.

Men’s Verandah: The verandah was built in 1972 to serve the needs of Meherazad pilgrims. During Baba’s time, however, Baba and the mandali used to sit outdoors under the shade of trees or the open sky.

Blue Bus: Between December 1938 and November 1941 the Blue Bus served as the primary vehicle in which some 25 of Baba’s women and men mandali accompanied Him on travels that spanned the Indian subcontinent, from the southern tip to the Khyber Pass. Baba carried out the Great Seclusion in the Blue Bus in its current location in July of 1949.

Manonash Cabin: In 1951, the two cabins on Seclusion Hill were dismantled at Baba’s order and re-assembled by Padri into a single cabin in which Baba completed His Manonash work. After the conclusion of the Manonash phase, Eruch lived in this room for almost forty years until his death in 2001.

Mango Tree: Mehera planted this tree, using the pit of a mango that had been given to Baba by a mast.

Cottage Across from Mandali Hall: Originally built to house a generator, the cottage served Baba for various uses, and provided bedrooms for Gustadji, Baidul, and Francis Brabazon.

Seclusion Hill: Rising to a summit two or three hundred feet high several hundred meters to the south of Meherazad residence, this hill acquired its name from the major seclusions that Baba completed here, first in 1947 and later at the culmination of the New Life in 1951-52.

Approach Road: This dirt road runs about a kilometer from Meherazad residence to Vambouri highway. Its shaded canopy of nandoorgi trees (from the banyan family) was planted by Kaka Baria with the help of the men mandali. Baba would take walks down the approach road with various of His men and women mandali.