As a critical edition, Tiffin Lectures has been compiled and edited from an assortment of primary manuscripts, some of them in the Avatar Meher Baba Trust Archives and others housed in other archival collections around the world. This section provides facsimile reproductions of all significant manuscript sources used in the editorial process, as well as descriptions of these sources and explanations of their significance. 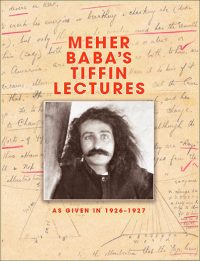 Meher Baba’s Tiffin Lectures, a collection of fifty-two discourses, were given by Meher Baba from 1926–27. These lectures were never published during Baba’s lifetime. They survived in the form of typed and handwritten manuscripts preserved at Meherazad and other places. Although known to some of the older members among Meher Baba’s mandali, with the death of that older generation, these lectures receded into obscurity and had largely been forgotten. Their rediscovery and publication, almost nine decades after their original composition and transcription, brings to the world an extraordinary treasury of some of the early words and discourses of the Avatar.

These lectures were given by Baba through the medium of live “talks” with his close male disciples during the period when their initial training was still in progress, and as the first phases of Meher Baba’s work were approaching their culmination.

This vibrant period of the early days in Meherabad is brought to life in many ways throughout the book. Over sixty photographs and introductory anecdotes give context to each lecture. More than thirty full-color illustrations based on diagrams given at the time by Baba are accompanied by reproductions of the diagrams from the original manuscript. The history of the “Tiffin Lectures” in the Supplement describes the period during which they were given. This additional background contributes to an in-depth picture of life in Meherabad with Meher.