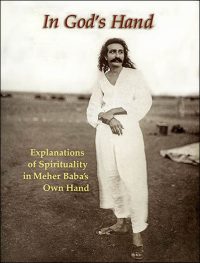 In God’s Hand reproduces in facsimile a unique 39-page autograph manuscript in Meher Baba’s own handwriting. That facsimile appears here in full color. (The original manuscript is currently housed in the Archives of the Avatar Meher Baba Trust.)

The supplement shows each source image on its own page with textual representations. The First 10 images are included here.

Sometime around 1925, Avatar Meher Baba wrote out, in pencil on inexpensive notepaper, thirty-nine pages of explanations on spirituality. Recently come to light, these handwritten pages record basic truths about God and illusion, Light and darkness, the dream of creation and the awakening to Self, themes at the core of all of Baba’s spiritual explanations in later works.

The pages give a vivid picture of Meher Baba’s dynamic personality in his early years: his quick-silver energy and vitality, his fluid changes of mood and style, his astonishing creativity. The manuscript is all the more precious because, from 1927 until he passed away in 1969, Meher Baba stopped writing altogether, except for signing his name.

In this edition prepared by the Avatar Meher Baba Perpetual Public Charitable Trust, the manuscript pages have been presented in facsimile, in full color and actual size, so that the remarkable beauty of the original manuscript may be enjoyed by a wide public. For readers who would like to study the content of Baba’s explanations more closely, the facsimile is followed by a supplement containing a printed text of the pages, translations of non-English words, footnotes, and textual aids.

Illumination in its contents, visual impact, and evocation of Meher Baba’s early personality, “In God’s Hand” opens a window on an event unprecedented in mankind’s’ recorded history: the God-Man writing about God in his own hand.