Hazrat Babajan School. From His first days at Meherabad, the local children were attracted to Meher Baba. He encouraged them to visit Him daily, usually in the shade of the neem tree near the road on the path to the Post Office. He would talk and sing songs with them and give them something good to eat. After Baba returned to Meherabad for the first long stay, the number of children coming every day increased. In response to the need of these mostly very poor children, Baba opened a free boarding school here on March 25th, 1925. It was named the Hazrat Babajan School in honor of His first master. All children were welcome regardless of caste, creed, or religion, which was a radical idea at that time. At first the school was a simple structure of bamboo matting, but within a few months a larger building of corrugated steel sheets was built. This school for boys was expanded again the following year with an enrollment of over 200. Classes for the smaller Hazrat Babajan Girls School were held at the Post Office and at a few locations in Arangaon at different times. The schools provided free tuition, food, and clothing, emphasizing education, nutrition, cleanliness, discipline and physical education. This building was dismantled by November 1926, at the end of the first long stay at Meherabad. Within a few months, the Hazrat Babajan High School was reopened in the old bungalow where the hospital had been. 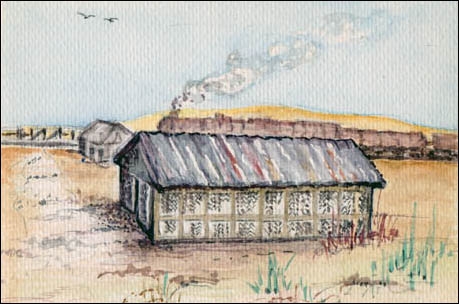 Upasni Serai. In early 1925, another small temporary building referred to as the dharmshala was constructed north of the Original well (near where the engine room is now located) to house pilgrims visiting Baba. In September 1925, a second building was constructed on the southeast side of the Original well. It was named Upasni Serai (inn) in honor of one of Baba’s Masters, Upasni Maharaj. This rest house for poor pilgrims provided them with free lodging, food, and clothing. Sometimes Baba even had the mandali help bathe the pilgrims. Thirty to thirty-five people per day could make use of the Upasni Serai. These temporary structures were also demolished by November 1926.