Mandali and Family Quarters. Makan-e-Khas, meaning the ” House of the Chosen”, was the name Baba gave to the men mandali’s residence during the first long stay at Meherabad. The improved building of bamboo matting and a roof of corrugated steel sheets was completed on September 4th, 1925. With the doorway in the center of the square 30-foot structure, the bedding rolls were laid in rows on each side with a seat for Baba in the middle.

On the night of July 9th, 1925 Baba retired to the Jhopdi after giving final instructions to the mandali before beginning His silence. In these detailed final instructions, Baba had reminded the men always to carry lanterns at night since He would protect them from anything except snakebites! A few minutes after Baba went to the Jhopdi, Padri went out to urinate and encountered a cobra. He shouted, “Snake!” and the other men came with staffs to disable the snake. Baba came back from the Jhopdi to see what the disturbance was about, and was pleased that Padri had obeyed the order to carry a lantern. Padri then handed Baba a staff and He crushed the head of the cobra. Then Baba went to the Post Office where the women were staying and told them that they were fortunate that the incident with the snake had taken place because it gave them one more chance to hear Him speak. They did not know, as He did, that they would not hear Baba speak again.

This building was dismantled in November 1926, and another makan was built north of the Original well a few months later during the second long stay at Meherabad.

From 1925, different families also became part of the Meherabad colony. During the long stays in the 1920s, the area south of the Post Office was the site of a few structures for family quarters of the same simple temporary style of that period. But what was usually referred to as the Family Quarters were a few structures in Arangaon located in the compound of what is now Meher Health Center. These earthen-wall buildings were also used at different times for the Hazrat Babajan boys and girls schools and for the beginning of Meher Ashram. But they were mostly used as residences for a number of mandali families throughout the years. The majority of the family quarters buildings were demolished in the 1970s so that the Meher Health Center and new staff quarters could be constructed. 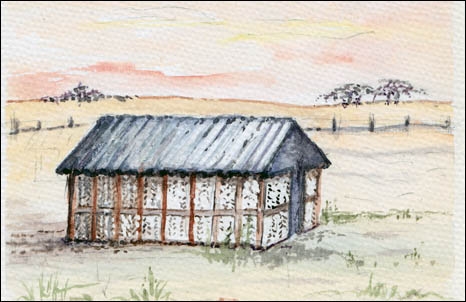 Sai Darbar. In 1925, during Meher Baba’s first long stay at Meherabad, the number of people coming for His darshan gradually increased. By the end of the year, while Baba was spending most of His time in and around the Table-House near the dhuni, several thousand people would show up on some occasions. It became apparent that a larger gathering place was necessary, so on November 29th Baba broke ground to build a large meeting hall, 66 feet wide by 96 feet long. Made of bamboo matting and corrugated steel sheets, it was completed by the new year. It was named Sai Darbar, meaning “the court of Sai”, in honor of Baba’s master, Sai Baba of Shirdi. At the north end, a stage was constructed for performances, and just before His 32nd birthday was celebrated, Baba had Ajoba build a small wooden cabin upon the stage. Beginning at 9:00 a.m. on February 18th, 1926, Baba gave darshan there to an estimated 50,000 people who had come for the celebration, which was stopped at midnight. Never since have so many people been at Meherabad during one day. In March, Baba moved His official seat from the Table-House to the Sai Darbar Cabin and continued His work of writing The Book inside. In November 1926, Sai Darbar was demolished (except the paved platform and box cabin) along with the other temporary structures of that period.