The Post Office. Baba’s first women mandali stayed in the Post Office building from the end of 1924 until the end of 1926. The large verandah to the east and south was used for gatherings and sometimes for school classes for boys or girls. At that time, a large compound was created with bamboo matting to the north to provide privacy. This compound contained toilets and a kitchen where the women would do their cooking for the colony, which often numbered in the hundreds then.

During the second long stay at Meherabad, the Post Office was used as quarters for family groups, and later Baba kept His disciple Pleader fasting in seclusion here for many months.

The Post Office was special and significant to Mehera because it was here on May 19th 1923, that she first bowed down to Baba and He told her family not to force her to marry. It was also here that Baba revealed to Mehera her role as His Beloved.

Near here, Babajan and Meher Baba had their meeting of silent communion. When Babajan came to Meherabad on April 1st 1928, she stood on the path near the Post Office as Baba came down the Hill and stood on the west side of the railroad tracks.

More Construction at Meherabad. Originally a bath-house for the British army camp, the Bath-Room building consisted of two large rooms where Baba’s first women mandali were housed during their first stay at Meherabad in 1924, and again during the Meher Ashram period of 1927-28. There was a small privacy enclosure of woven bamboo made around the west end as well as a large compound off the east end with toilets and kitchen facilities where the women did their cooking work. When Hazrat Babajan came to Meherabad to see Baba on April 1st 1928, the women peeked through the tata (bamboo matting) to watch them silently meeting near the railway tracks. This building was demolished after 1928.

A few weeks after Baba began His silence in the Jhopdi, He directed Ajoba to build the Table-House near the Post Office according to His specifications. The small room inside is 5 1/2 feet wide, 7 1/2 feet long, and just over 3 feet high. On October 11th 1925, Baba began to sleep in the Table-House, which was placed east of the neem tree near the road outside the Jhopdi gate. Baba also continued to write The Book inside the Table-House, usually during the mornings. From November 17th, the shade of the Table-House verandah also became Baba’s seat for greeting the crowds. But to maintain peace and quiet for His writing work from that time, He ordered that no one was to come near the neem tree from 8 a.m. until 12 noon.

In 1925, the monsoon season failed. On November 10th, in response to villagers’ pleas to save them from the extreme drought, Baba ordered that a Dhuni fire should be lit. Some of the mandali dug a pit north of the Table-House while others collected firewood and prepared materials. The fire was lit at 11:00pm. After some devotional music, Baba asked the villagers to depart quickly, but by the time they reached their homes, they were drenched by torrential rain. The heavy rains fell for fifteen hours and all the wells were filled. On that anniversary one year later, the Dhuni was lit again at 7p.m. and again it rained. The Dhuni was also lit on the 2nd anniversary and this time it rained for two and a half days causing severe flooding. The villagers came to Baba again, begging Him to stop the rain. 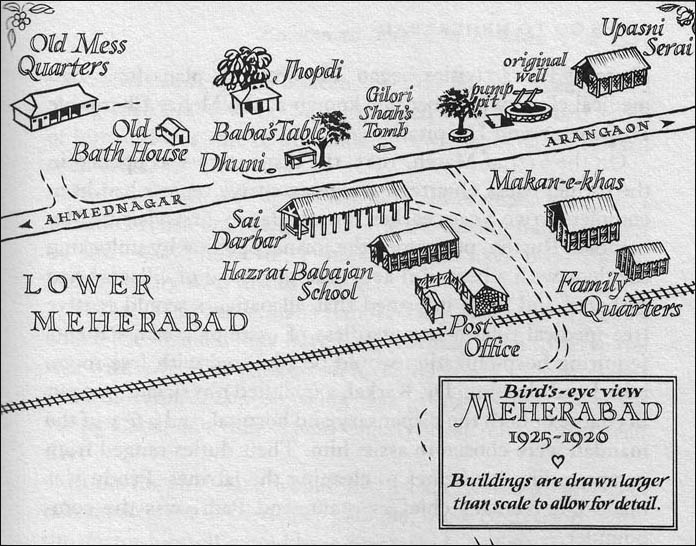