This tree stands directly outside Mehera’s eastern window. It has its own remarkable story. For in the early months of 1969, just after Baba’s dropping the body had left Mehera in a state of utter bereavement, the bark of this tree formed itself into a remarkable image of Baba’s face. The likeness remained clearly visible for about nine years, at which point new growth of bark obscured the clarity of the image. However, sometimes even today, especially in the light of dusk, one can still glimpse Baba’s features in the bark from inside Mehera’s room. 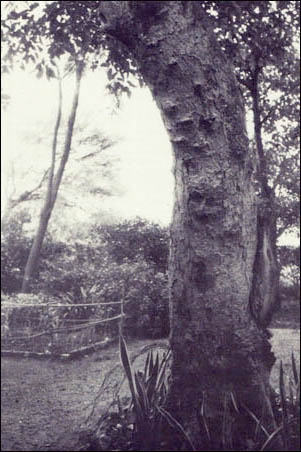 In fact, the story goes back farther than 1969. Several years before that, one day Baba happened to be strolling through the garden with some visitors. Mehera at the time was inside her room. Baba stopped by the Umar tree and placed His hand on the bark of the its trunk. He gestured, “I like this tree very much.” Peeking out from her window, Mehera saw Baba and heard His comment about the tree. She was curious as to why Baba would express a special liking for this particular tree when there were many other trees in the garden that she felt were more beautiful.

But after Baba dropped His body, the answer was revealed to her when His face appeared in the bark at the very spot where His hand had lovingly touched it. Thus an episode which seemed at the time to carry no special significance emerged later as a sign of Baba’s foreknowledge and special care for His beloved Mehera at the moment when she needed it the most.