On 16th October 1949, Baba left Meherazad to begin living what He called the New Life. Sixteen men and four women mandali were chosen by Baba to accompany Him in a life of wandering which severed all connections with His old life. This New Life, Baba said, would be one of total hopelessness and helplessness with absolute reliance on God.

The tale of this caravan, fondly called the New Life caravan, begins in Sarnath, on 12th December 1949. This marks the beginning of the ‘fakiri’ or walking phase of the New Life which continued until February,1952. Baba had ordered Padri to design and build some sort of a vehicle or caravan that the women mandali could use for sleeping accommodations at night. This was accomplished with the help of Sarosh Motorworks in Ahmednagar.

The body of the caravan was originally a bus. Viewed from the back the caravan looks like a motorized vehicle with huge truck tires. But from the front it resembles a large cart with a raised seat for the driver. The caravan was pulled by two bullocks. One was an English bullock named Raja that had been used to plow the fields around Meherazad, and the other was an Indian bullock that had been used at Meherabad. 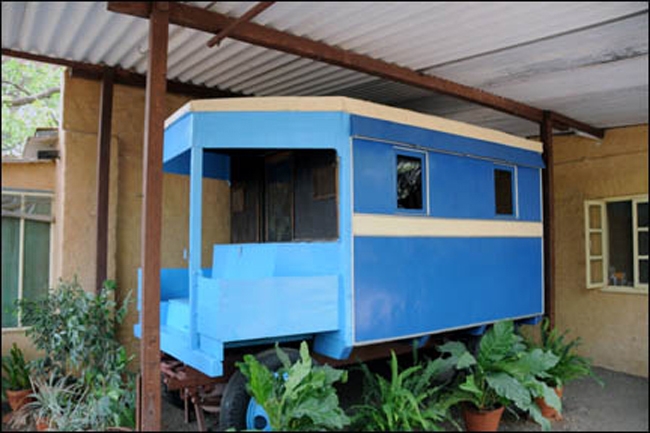 Secured to the right side of the caravan was an attachment of metal rods that would swing open to form a triangular enclosure. A tarpaulin would be hung across these metal rods which hooked into each other forming a private area large enough for bathing. Eruch would also pitch Baba’s tent, just big enough for one person, in this enclosed area when they camped for the night. Two flaps formed a door that closed with a zipper, thus keeping out insects, such as mosquitoes, while providing some ventilation.

Although the four women were afforded some protection from the elements, the men slept in the open with only the stars as their roof.