In 1944 when the women were first staying at Meherazad, they would take long walks in the evening with Baba around the northern side of the hill and its base. They were fascinated by the unusually beautiful rocks they saw and carried many of these treasures home. Some of the rocks were so big that eventually they brought the rocks back in a wheelbarrow. Most of these rocks went into the foundation of the new bungalow. 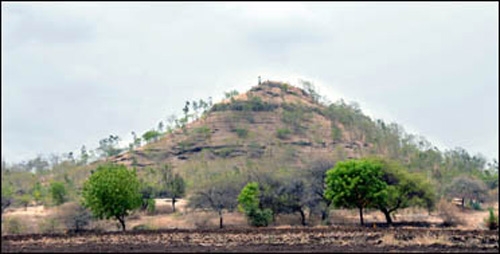 The hill was very difficult to climb and there was no easy path to the summit. When Baba decided that he wanted the cabins built on the Hill for His work, Dr. Donkin decided to cut a trail up the hillside.

In December of 1947, Baba called for the mast Ali Shah to be brought to Meherazad for His work. Baba wanted to work with the mast on the Hill.

Padri was told by Baba to build two small huts on the hill. The huts were made of asbestos roof and siding. Each hut measured 10′ by 12′ in size. One hut was located on the summit of the Hill, and another hut, made of the same materials and dimensions, on a slightly lower plateau for Baba’s work with the mast. The mandali would stay in a small tent pitched on the lower plateau. At the very edge of the lower plateau, a natural formation of rocks served as a makeshift wood cooking stove.

During the 1955 Sahavas programme, Baba led each of the four language groups up to the summit of Seclusion Hill. When He led each group up the Hill He told them: “How fortunate you all are that I am leading you up this hill in flesh and blood. Seventy years from now, people will come from all over the world to this Hill on pilgrimage. And what will they find here? Rocks!

“Pick up a stone and keep it with you in memory of this day.”