At the tail end of the wandering period in the New Life, Baba announced the beginning of a new phase of His work. It was called Manonash, annihilation of the mind. This work was begun in Hyderabad, continued on the Hill, (Seclusion Hill) after Baba’s return from the New Life, and was eventually completed in this cabin. 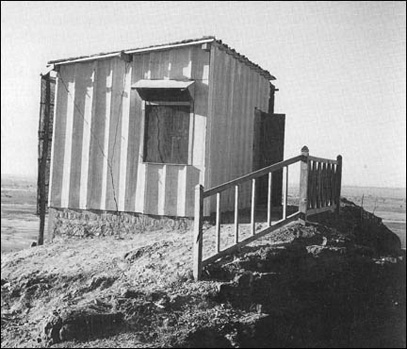 The two cabins on Seclusion Hill were dismantled and carried piece by piece down the hill by the men mandali. These two cabins were then re-assembled by Padri into one cabin. The interior of the cabin was divided by Baba into two areas; the western side became Baba’s work area and the Eastern side his rest area. A curtain was hung dividing the cabin into these two specific areas.

As the Manonash phase moved towards completion Baba ordered a pit to be dug behind this cabin. On 31st January 1952, He called the mandali together and had a special message dictated by Him read out: “All rites, rituals and ceremonies of all the religions of the world are hereby consigned to flames.”

Baba then threw the paper into the Dhuni fire. The next day Baba stepped out of the Manonash cabin and instructed Eruch to use it for his room.

Today the Manonash cabin is open to pilgrims.

Eruch expounds on the Manonash Cabin