Though Tipoo remained unpredictable with strangers, over the ensuing years he once again became the darling of Meherazad—at least on the women’s side. I remember one day Lindesay (Reiter) sitting on the veranda outside the kitchen gazing at Tipoo, who was tied up at some distance in the compound. She turned to me and said, “You know what his problem is? He’s just too damn handsome for his own good!” And he had grown into a beautiful dog who demonstrated remarkable, almost human-like sensitivity to those of us who loved him. 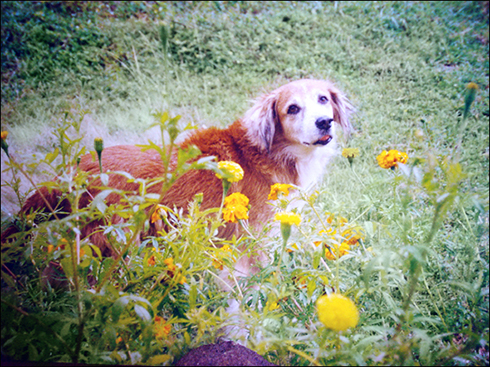 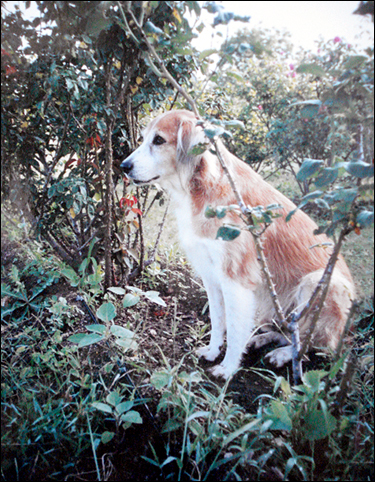 When Tipoo was about 11 years old he developed a swelling on the joint in his left front leg. Meheru and we all thought it was arthritis at first but soon realized something more serious was going on. During the car ride to Pune to see a veterinary doctor there, Tipoo sat facing the window so he could look out but would repeatedly turn around towards me, place a paw on my thigh and gaze meaningfully into my eyes as if to say, "Is everything all right?" But it wasn't. The vet confirmed our fears that Tipoo had cancer of the bone which would require an amputation of his leg.

A week later we returned to Pune for the operation. It was a traumatic event, but the most distressing time was yet to come. In the evening, before Tipoo came out of anesthesia, I spoke with Dede Mavris in Myrtle Beach, an excellent vet and animal advocate, and the canine consult for the Meherazad household. She talked me through the process of his rehabilitation and warned me that Tipoo would be depressed and upset when he discovered his leg was missing. Even still I was not prepared for what happened.

Around midnight Tipoo became fully aware of the missing leg and began to howl. And he was inconsolable. I tried giving him every medication I had to sedate him but nothing worked. I even sent our driver to the vet's house in the middle of the night for more sedation but to no avail. Finally, around 4 in the morning I gave up—I lay down on the floor and held Tipoo in my arms as he continued to wail. After 30 minutes or so Tipoo suddenly stopped crying and sat up. From my sleeping position on the floor I watched him with great curiosity as he pulled himself up on his three legs and just stood there looking around the room. I could almost see his mind working as if he was thinking, "Yeah, I can do this. This isn't so bad." And then, miraculously, after hours of keening and crying, Tipoo lay down and went to sleep. His grieving was over.

[Next week, in "Tipoo Part 3," we will include a recording of Tipoo singing the arti with the Meherazad women.]