Sometime in the 1920s, Mehera’s mother had a gaadi (a chaise-style divan) made for Baba using wood of a tree from the compound of the family home in Poona. Nobody knows the exact story, but this much is known from recollections shared by Mehera. There are several other gaadis that Baba used—a smaller one now in Mehera’s kitchen on Meherabad Hill, a folding one known as the “travelling gaadi,” the more formal one in His sitting room at Meherazad—but the one in this story is the most familiar and often seen by pilgrims where it currently sits under the Tin Shed.

You will find in these photos that Baba had the gaadi moved from place to place as required for His work and events. It has been in Toka, in Nasik, at Lower and Upper Meherabad, indoors and outside. Brief mentions in Lord Meher and elsewhere citing moments in Baba’s life involving this gaadi are few and the stories are more about the events of the day and place. But there are many photos of Baba’s gaadi, often with Him seated on it, and in the spirit of “a picture is worth a thousand words,” here is the gaadi’s story.

This photo was probably taken on 18 February 1926, when thousands thronged to Meherabad for Baba’s birthday celebration. Baba’s gaadi is on the pandal platform, in front of the Sai Darbar cabin doors, near the railway line at Lower Meherabad. (Photo courtesy of AMBPPCT Archives) In Lord Meher it is reported that in Toka on 8 September 1928 Baba was carried on the gaadi in a procession and “… all were so engrossed in utter joy that they forgot themselves and lifted Baba with such abandon that he fell off the gaadi and landed in a thicket. Baba kept smiling, despite being hurt.” (Lord Meher Online Revised p.964). The following day this photo of Baba with some of the Prem and Meher Ashram boys was taken. (Photo courtesy of MN Publications) Baba is seated on the gaadi during His birthday celebrations in Nasik on 18 February 1937. (Photo courtesy of the MSI Collection) Baba and Mehera are in the East Room at Upper Meherabad in 1937. Mehera recalled that this photo was taken during a day when the Western women were visiting from Nasik. Baba had dressed up to show the visitors what Mehera and the Eastern women had made for Him. (Photo courtesy of the MSI Collection) Baba is on the gaadi outside the Samadhi. Kitty Davy is sitting next to Him. This photo was taken on her birthday, 28 August 1938, which coincided with the opening celebration of the Meher Retreat building on the Hill. (Photo courtesy of MN Publications) This photo was taken at Lower Meherabad in the 1940s by Ali Ramjoo. Baba is sitting on the gaadi and handing prasad to one of His brothers. (Photo courtesy of MN Publications) 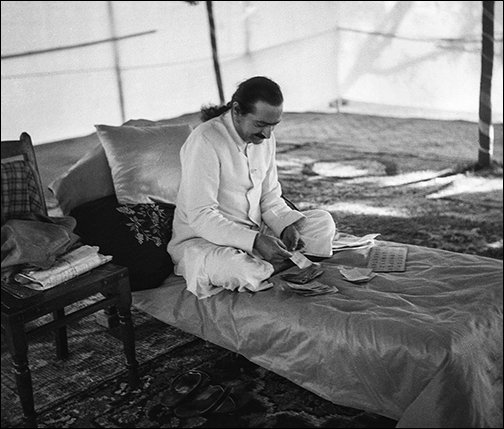 This image was taken on 27 December 1942 at Lower Meherabad during the meeting, “Work for the Spiritual Freedom of Humanity.” The gaadi appears to be on the raised Sai Darbar platform, which must have still been intact at the time. (Photo courtesy of the MSI Collection) Baba is on the gaadi in Mandali Hall at lower Meherabad with Western and Eastern men during the “Three Incredible Weeks” gathering in September 1954. (Photo courtesy of MN Publications) 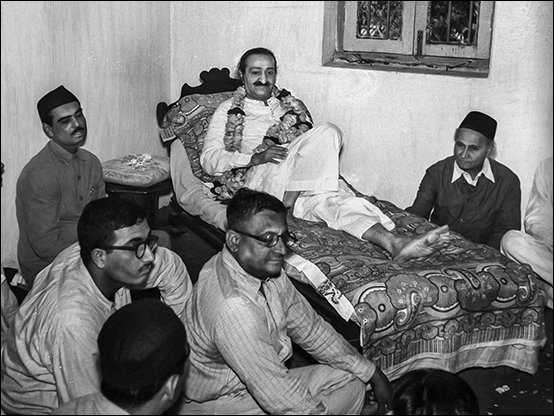 Baba is seated on the gaadi in the upper story hall of the Meher Retreat building in Upper Meherabad, during the sahavas programme in November 1955. (Photo courtesy of the MSI Collection) Baba is on the gaadi at the west side of the Meher Retreat compound at Upper Meherabad during the February 1958 sahavas. (Photo courtesy of MN Publications) Eruch’s aunt, Banumasi, sitting next to Baba’s gaadi under the Tin Shed. This was at the time of Baba’s entombment, January 31—February 7, 1969. (Photo courtesy of MN Publications) In the 1970s and ’80s Mehera and the women mandali would come to Meherabad a few times a month and take darshan at the Samadhi and elsewhere on the Hill, joined by visiting pilgrims. In this video clip Mehera is offering flowers at Baba’s gaadi. You can link to the video at the end of the story. (Still from film footage by Wendell Brustman, copyright AMBPPCT Archives.) 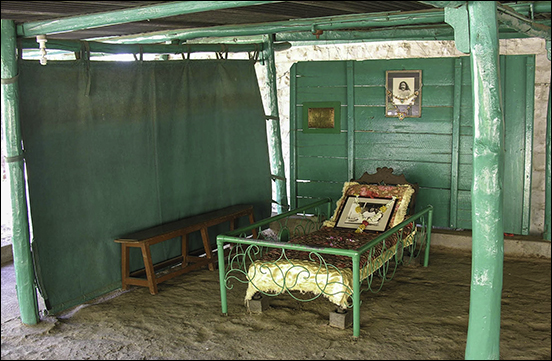 Through the passing of time, the gaadi has reached a more fragile physical state and is now protected by a railing around it and a tarp barrier to keep out the elements. The story of Baba’s gaadi continues with His pilgrims to Meherabad—here is a photo of how it looks today. (Photo courtesy of Adair Adams.)