In 1938, Baba embarked on a series of journeys throughout India. Accompanying Him were many Eastern and Western women mandali (disciples). This bus, originally built to seat 16 passengers, held as many as 24 women, children, and pets during these journeys across India. Elizabeth, Eruch and occasionally Dr. Donkin, were the drivers of the bus. 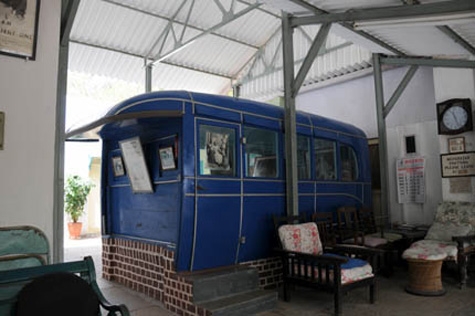 After the tours were completed, Baba decided to dispose of the bus. All His lovers were to partake in a raffle and the winner would receive the bus. The proceeds from the raffle would then be used by Baba for His poor programmes.

A Baba-lover form Delhi, Keki Desai, won the raffle, but he said, “What am I to do with it, it is yours Baba.” Baba commented, “It has come back!” So the engine, wheels and front end of the bus were removed and the body of the bus was placed on empty oil barrels and fixed in mortar, brick, and lime. The seats inside the bus were also removed so that the bus could be transformed into a small cabin.

The Blue Bus was then used by Baba during the Great Seclusion prior to the New Life. Originally, there was only one door, in the rear, but at the time of Baba’s Seclusion, the front door was put in.

Today, pilgrims may still go inside the blue bus whenever they wish. It houses the surgical bed used by Baba, from the 26th of January 1969 until He dropped His Physical Form on 31st January 1969.