As you walk into Baba’s House through Mehera’s porch, you find yourself in a large passageway. To the left is an inside door opening to Baba’s room. This inside access allowed Mehera and the women mandali to enter Baba’s room when He wished, without their having to make contact with the men mandali, who came and went through a separate outside door. 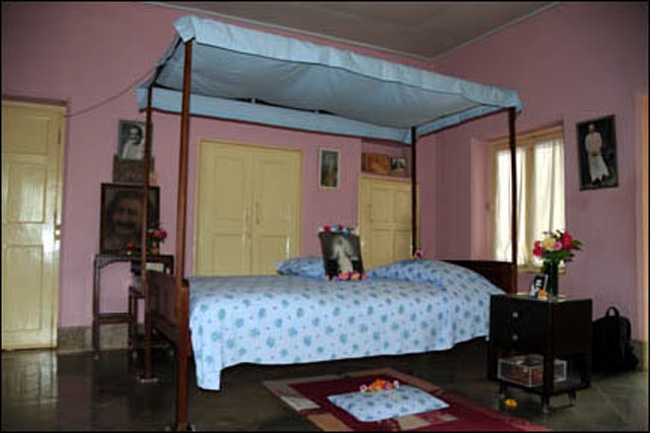 As mentioned in the section on “Baba’s House,” Baba had originally occupied a room upstairs; and He continued to do so even after His injuries from the Satara automobile accident had made the process of climbing and descending the stairs arduous. But one winter morning in 1958, trying to protect Himself from the cold breeze as He climbed down the stairs, Baba covered His face with a scarf while holding the banister with His other hand. Baba’s foot suddenly slipped on the stair, causing excruciating pain to his hip joint.

This was too much for Mehera and the women mandali to bear, who for some time had been begging Baba to move downstairs into the room then being used by Naja, Dr. Goher and Meheru. Baba, Himself had already lived there for short periods — right after the 1956 accident, for example. But He still preferred His upstairs room, and in 1957, when He had recovered from His injuries sufficiently, He returned to it. But Mehera could not endure the sight of Baba in pain; and after the accident, she once again pleaded with Him to shift to the ground floor room. This time Baba agreed.

Knowing all too well that Baba might change His mind, the women seized the opportunity and moved His things downstairs while Baba was with the men mandali. When He returned to the women’s side for lunch, everything was in readiness. From that time forward, Baba stayed in this downstairs room. It was in this room that Beloved Avatar Meher Baba dropped His Physical Body on 31st January 1969.