As the first Avatar of the mechanical era, Meher Baba had the opportunity to ride in and on a wide variety of vehicles as well as many different non-mechanical conveyances. This photo essay tells the story. 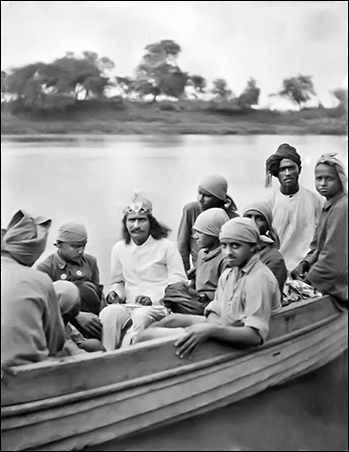 According to Chanji’s diary, on 4th September 1928: “Shree called all boys at 4 p.m … [and] went to the ghat [a flight of steps leading to a river] in the rickshaw with boys & mandali —got 3 photos alone & 1 on the boat with a few boys.” (Quote courtesy of Avatar Meher Baba Trust Archives document collection; photo courtesy of MN Publications) 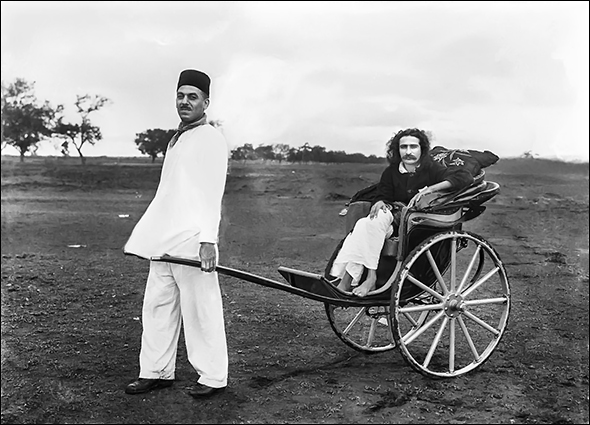 Although the story of this hand-drawn rickshaw was told in On Sacred Ground a few months ago (http://www.ambppct.org/rickSh.php), no presentation of Baba’s rides would be complete without it. A photographer from Ahmednagar, G.M. Shah, who took beautiful early photos of Baba, was asked to take this one of Baba in the rickshaw. This rickshaw is on display in the Museum on the Hill. (Photo courtesy of MN Publications) 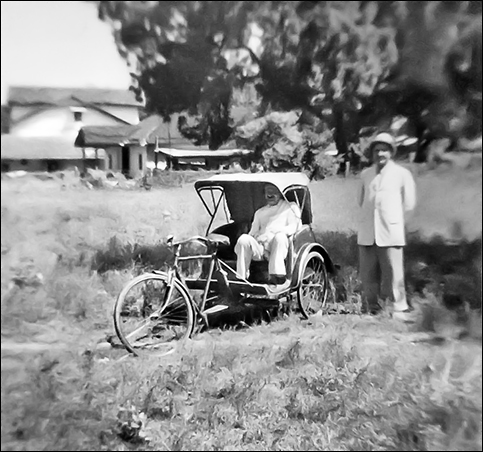 Here Baba is photographed sitting in a cycle rickshaw. Baidul is standing on the right. Nonny labelled this photo “Panchgani 1938.” ( Photo courtesy of MN Publications) 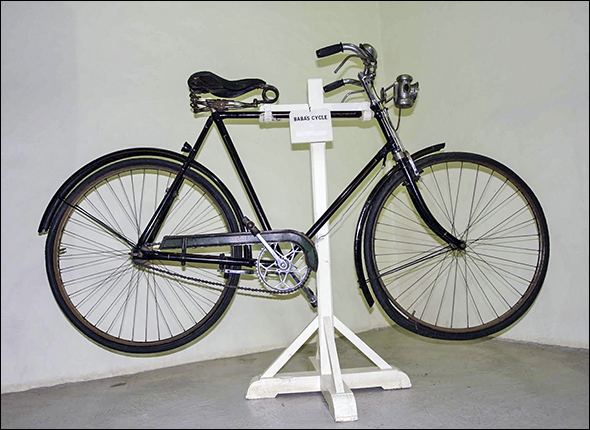 When He was still Merwan, Baba often rode bicycles around Poona. In May of 1913, at the age of 19, Baba most famously got off his bicycle when Babajan beckoned him. After receiving her embrace, Merwan wandered home in a daze, leaving the bicycle behind. Although that bicycle was never recovered, the photo above shows another one from Baba’s youth, which is on display in the Museum on Meherabad Hill. (Photo courtesy of the Avatar Meher Baba Trust Archives) 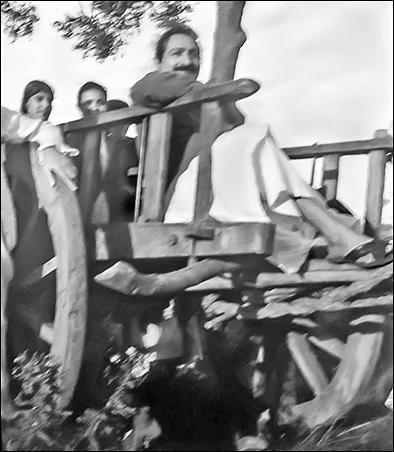 Mani took this photo of Baba, Gaimai and Arnavaz in a bullock cart. It was probably taken at the end of the 1930s in Meherabad when they were going on a picnic. (Photo courtesy of the MSI Collection) 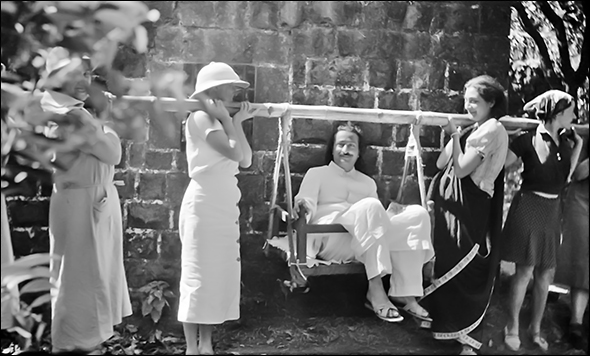 It is reported in Lord Meher [online, p.1812] that “on Thursday morning, 25 March 1937, Baba took the Westerners for a picnic at Trimbak, the source of the Godavri River, sixteen miles from Nasik. The group left Nasik at 5:00 a.m. in three cars. At the base of the hill, they got out and began ascending 700 carved stone steps. Baba had Jean, Nonny and a few others, who were not well, carried up on seats swung between two poles.” Here is Baba posing in one of those seats. From left are Nadine, Margaret, Baba, Freny and Delia. (Photo courtesy of the MSI Collection) 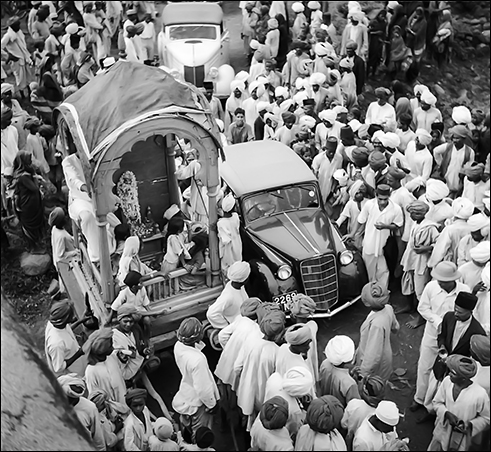 Throughout India and the West, Baba rode in many cars. In this photo we see Him being driven through Arangaon, the village next to Meherabad, on His way to the darshan programme on 28 August, 1938. This was at the time of the inauguration ceremony and opening of the upper story of the Meher Retreat building on Meherabad Hill. (Photo courtesy of the MSI Collection) 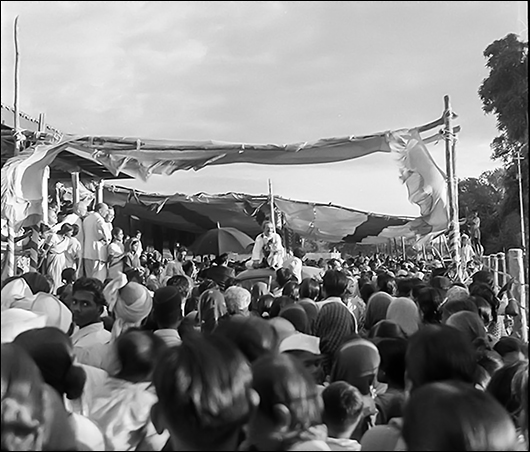 In this photo Baba is seen leaving the darshan programme at Wadia Park, Ahmednagar on 12th September, 1954. In Lord Meher [online, page 3559] it is reported that “Baba continued to hand out prasad until 6:00 P.M., but by this time, the crowds had increased so much, they were uncontrollable. Confusion broke out. So Baba touched the remaining prasad, stood up, offered his salutations to the throng and climbed upon the roof of Adi’s Chevrolet. The police and mandali formed a cordon around the car, and as Baba saluted the people with folded hands, the car slowly drove out of Wadia Park. Thunderous acclamations rent the air.” (Photo courtesy of MN Publications) 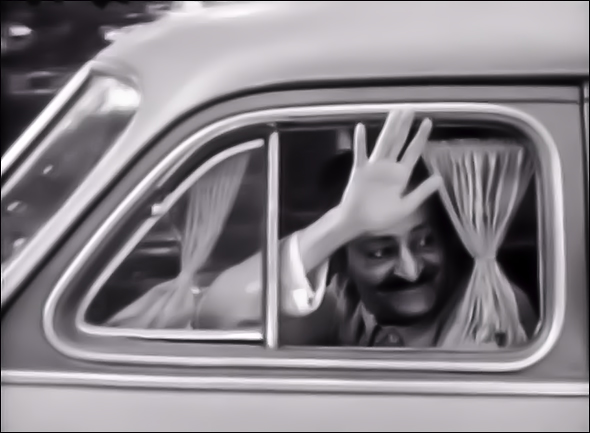 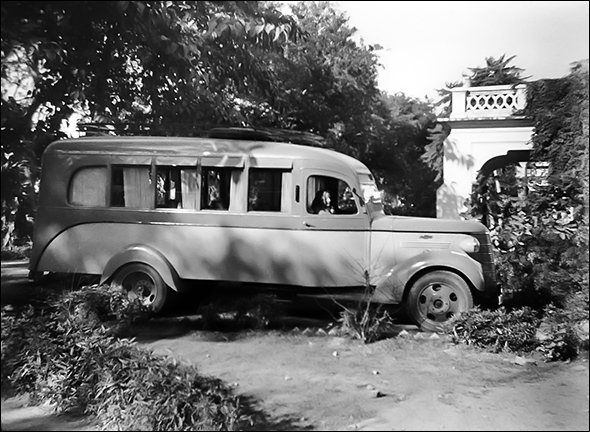 Baba and a large group of His disciples traveled the length and breadth of India in this bus during the Blue Bus Tours. This photo showing Elizabeth at the wheel was taken in front of Jal Kerawala’s residence in Jabalpur where Baba and the women stayed between December 1938 and May 1939. (Photo courtesy of the MSI Collection) 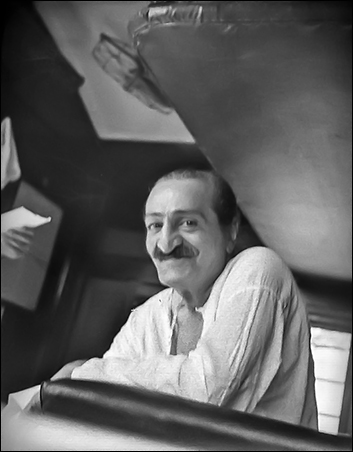 Although Baba traveled frequently by rail throughout India, there are few photos of Him on a train. This is one of the rare ones, with Baba seated on a lower bunk in a train carriage. It was probably taken circa February 1954, possibly on His way to Andhra. (Photo courtesy of MN Publications) 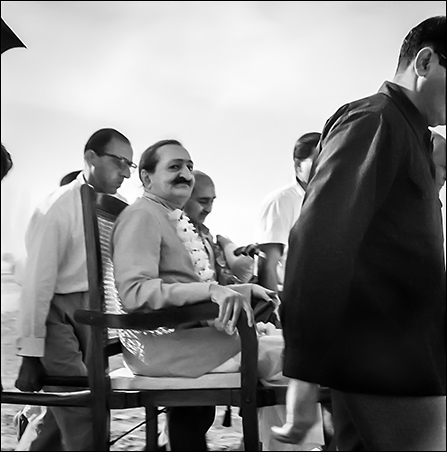 After His second auto accident, Baba sometimes was carried in a lift-chair. It is reported in Lord Meher [online p.4268-69] that on the occasion when this photo was taken, “Baba arrived at Meherabad at 8:15 on Monday morning, 17 February 1958. Eight men took turns carrying him up the hill in His lift-chair. The sahavas group in their enthusiasm disregarded Baba’s instructions to follow his chair and made much noise and raised a lot of dust by running in front of him. To control them, Baba ordered them to remain a few hundred yards behind him and to follow the women in an orderly fashion.” (Photo courtesy of MN Publications) 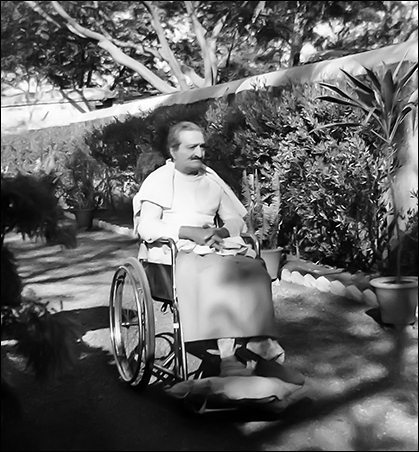 This photo of Baba in a wheelchair at Meherazad in March 1957 was taken by Mani. (Photo courtesy of the MSI Collection) 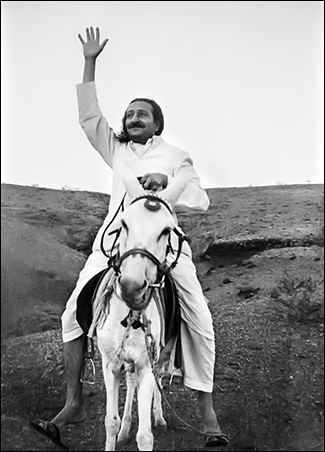 And last, but not least, it is reported in Lord Meher [online, p. 1729-30] that “A white donkey named Champa was brought to Meherabad, and on the 8th, Baba sat on it for the first time. Ghani had been specially called from Lonavla just to hold the reins and lead the donkey. … At dusk one day in July, 1936 Mani took photographs of Baba on the donkey.”