A Place of Residence. The long walk without breakfast on that summer morning left them hungry and thirsty, so Baba sent two of the mandali to the village to bring what they could. A carpenter named Gungaram Pawar supplied them with simple millet bread and a bucket to draw water from the nearby well. The old man would become Baba’s first disciple from Arangaon, as well as His first Christian follower. Baba gave him the nickname, “Ajoba” which means, “respected old man.”

That evening, Baba and the mandali began staying in the Post Office building near the railway line. During those first short stays at Meherabad, Baba and the mandali would reside in this stonewall structure that was built by the British for the army camp. The 18 by 30 foot building had three windows in the south wall and a single door in the north wall.

When Baba and the mandali returned to Meherabad in April of 1924, Baba ordered a hut to be built near one of the few trees away from the road. With the help of the old carpenter and his crew from Arangaon, and a mason from Ahmednagar, the mandali worked as laborers. Baba worked alongside the others making sure the job was done according to His requirements, and the Jhopdi, which means hut, was completed within 10 days. It was also called “Agra-kuti”, which means, “first hut” being the first new building Baba had constructed at Meherabad. After the construction of the Jhopdi was completed, Baba had the mandali plant chameli and other shrubs around it. An orchard was planted to the south, and the whole area was enclosed by a wire fence with teakwood posts to protect it from livestock. Today there is a gate in the exact location of the original.

Now that Baba had a place of residence or ‘seat’, the mandali wanted a flag to mark it. On April 23, a debate took place. The Hindu’s wanted orange or red; the Muslims claimed that green was better, but the Zoroastrians didn’t like either color. So Baba settled the issue by proposing that the flag be of seven colors; the bottom should be red and the top sky blue. The other five colors were left for the mandali to decide. Dina Talati sewed the flag that day and before sunset, it was hoisted for the first time near the Jhopdi.

The Jhopdi was Baba’s personal quarters during this time, which He also used for seclusion work and darshan programs during the 1920s and early 1930s. During the early seclusions, one of the men mandali would be stationed outside as a watchman under one of the windows, and Baba would communicate with him by knocking on the window and passing notes through it. Baba would do everything inside the Jhopdi, including bathing and eating. Baba lived very simply here, keeping His bedding on the floor and sweeping the room Himself.

The greatest significance of this building is that Meher Baba began His long silence here. Baba had sometimes observed silence for short periods during His seclusions in the Jhopdi. But in June 1925, He informed His followers that He was planning to keep silence for one year, or until His work was completed. Pandoba, a teacher at the Hazrat Babajan School was disturbed by Baba’s intention to keep silence for a long period. So he asked Baba, “But Master, how will you teach us?” Baba replied, “I have come not to teach, but to awaken.” (Lord Meher) This very significant quote is etched on the marble of His Tomb-Shrine.

After giving detailed instructions to all of the many residents of Meherabad, and reminding them to fulfill their duties with absolute attentiveness, Baba entered the hut, speaking for the last time on the evening of July 9th. (His silence however, continued for 43 and a half years until He dropped His body on January 31st, 1969.)

On the morning of July 10th, Baba came out of the Jhopdi and after having His bath, made His usual inquiries to the Mandali through writing. As time went by, the mandali were surprised that Baba was able to maintain silence, since He used His beautiful voice to sing and speak to them so often. In the beginning Baba used pencil and paper or a slate with chalk to communicate. Only three days after beginning His Silence, Meher Baba began writing what has become known as “The Book” in the Jhopdi. On January 2nd, 1927, Baba gave up writing except for His signature, and began using an English alphabet board. He also gave that up on October 7th, 1954, and began to communicate then through His own unique system of hand gestures and expressions. This little building and its premises were also used for darshan programs during the 1920s and early 1930s, and occasionally throughout the years as mandali quarters, the homeopathic dispensary, and for special purposes during meetings. 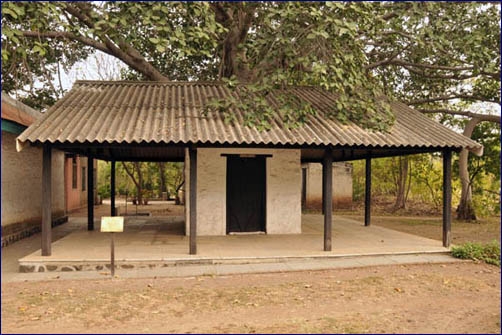 Old Bungalow was constructed in 1916 and served as the officer’s mess hall for the British Army camp. During Baba’s first stay at Meherabad in May of 1923, He and the mandali refurbished this building while staying in the Post Office. During the short summer stay of 1924, the white horse that Mehera gave to Baba was brought here. Baba named him Sufi and kept him on the northeast verandah of the building.

Through the years, the Old Bungalow was used for many purposes, but mainly as a residence for the mandali and a few of the masts. During the first long stay at Meherabad on March 21st, 1925, Baba opened the “Meher Charitable Hospital and Dispensary” in this building; it operated for 19 months. During that time, over 7000 outpatients and 500 inpatients were treated here. Part of the northeast verandah was enclosed to make an operating room where cataract surgeries were performed. A leper asylum was established on the grounds to the east.

From the beginning of 1927, the main halls were used as classrooms for the Hazrat Babajan High School. Baba spent many hours grinding grain in a room in the southwest corner of this building during the 1920s. Meetings and music programs would also take place in and around this building. Games such as tennis and volleyball were played on the ground just to the east. Baba referred to Padri, Pendu, Adi Sr., and Vishnu, as the “four pillars of Meherabad”, after the four wooden posts that held up the rickety roof structure of the old building.

In May of 1934, Baba dictated the fascinating points on cosmology known as “The Divine Theme” while staying in the southeast room.

Since Baba dropped His body, most of the building has been used as a dharmshala. In 1982, the southern half of the building was demolished and rebuilt to provide extra space for pilgrim accommodations.